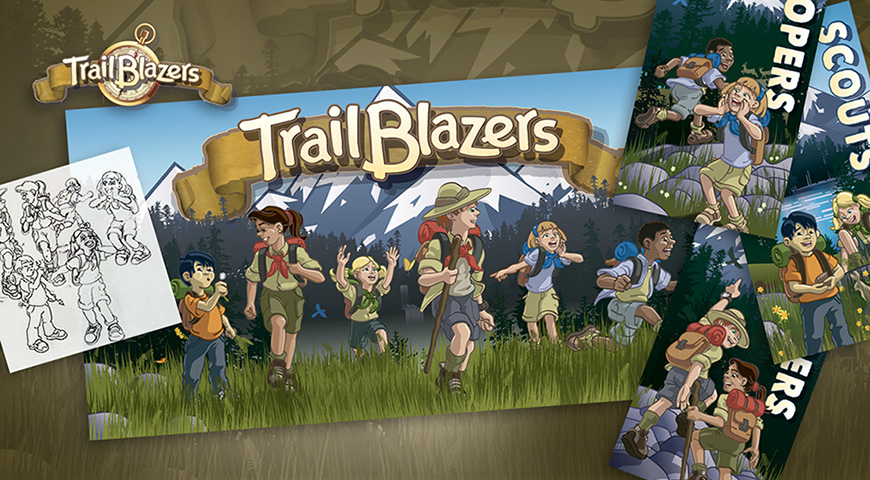 Fun: Its Not Just for Kids

One of our churches needed a way to make a big room look more fun and appealing for kids. So we were given the fun task of  designing and illustrating four banners for the Children’s Ministry program. What better way than by showing kids exploring the “great outdoors” with big colorful banners? There were to be four banners: a large 16′ by 8′ main horizontal banner showing all three age groups together, and then three smaller 4′ by 8′ vertical banners (one for each of the three age groups.) And, even before we finished the banners, we also completed a Children’s Ministry “TrailBlazers” logo.

The program space was for three groups of kids: Scouts (Kindergarten & 1st grade), Troopers (2nd & 3rd grade), and Explorers (4th & 5th grade). The staff wanted a boy and a girl for each level as well as a variety of ethnicities shown. As well as there being six (6) characters each had to be shown twice—once on the main horizontal banner and once on the appropriate vertical banner. This allowed us to emphasize not just ethnic or age varieties but also personalities—which is always fun. There is the leader, the encourager, the shouter, the runner, the collector, and the just plain distracted.

Putting It All Together

The vertical banners were designed first. They work together both as a triptych (with the background flowing from one to the next) and individually. The topography becomes more rugged and the birds and animals shown in the background become less tame (from sparrows to stellar jays to an eagle) as the age groups progress from younger to older.

The large horizontal banner was then developed using six new portraits of the child characters. A banner was added at the top with ‘TrailBlazers’, the name of the entire Children’s Ministry covering all three age groups.
And, finally, we concluded by providing the Children’s Ministry staff with vector (Illustrator) and pixel (JPGs) art of all twelve character renderings that they could use to place in future documents just to add some spice to them.