The Future of the Book

A History of the Future of the Book

“When Hollywood imagines the future, from Logan’s Run to Avatar, it tends to picture living spaces as sterile and characterless, without any cultural clues to the person who lives there. No record library, no DVDs, no Hemingway on bookshelves … often no bookshelves.

And here we are, catching up to that vision of the future. Sales of physical books dropped 30 percent last year, while e-book sales more than doubled…. ”1 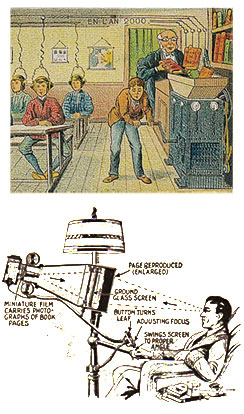 Books and media once inhabited our shelves and were a visible indicator of who we were, or wanted to be. Now these are becoming invisible bits stored in a computer device, enriching the reader but making our living environments more sterile.

The evolution of books has often been predicted:

– In 1910 the French artist Villemard showed that we would have audio books by the year 2,000. Of course the process he imagined was much simpler than even that of creating an e-book today — just drop the books into a grinder while some poor lad (perhaps a graphic designer?) turns the crank.

– In 1935 microfilm was being shown as the solution for making reading easier. “The April, 1935 issue of Everyday Science and Mechanics included this nifty invention which was to be the next logical step in the world of publishing.”2 No more heavy tomes to lift, nor those bothersome pages to turn, and (we assume) the text would be scalable to make it easy on the eyes.

These predictions did not exactly come true, but they established a vision that is driving some of the sweeping changes happening in publishing today.

The Current Future of the Book

What was once idle speculations or marketing ploys has now become real in ways no one could have predicted. The main force behind the change is the digitizing of information with computer devices capable of advanced graphic interface. But even as books have begun to evolve there is a typical backlash due to people missing aspects of traditional book reading. Inventors are beginning to try to incorporate traditional aspects of books that some will miss as content becomes completely digital.

– In this 2008 article we hear a humorous accounting of predictions for the next 100 years.3 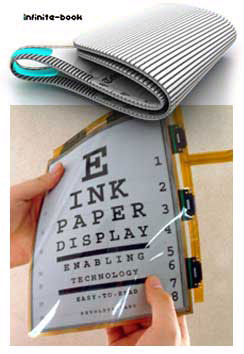 – Infinite Books is a company that wants to bring back page-flipping into the experience of reading. “Through the infinite book it is possible to scroll through a digital book or media by flipping pages, like a normal book. This makes it possible to read a digital book with analogue navigation.”4

– A few companies have been involved in the attempt to develop not just flexible computers with flexible screens. Fujitsu is one company and it has already developed screens that use e-paper which can be folded.5 (SEE ARTICLE.) One current problem is that the flexibility tends to make touch-screen technology difficult.

– At least two companies, E-Ink and Xerox, have been working for decades to develop e-ink. The basic concept for both is that a page is “printed” with millions of tiny balls that may appear black or white, depending on an electric charge. The difficulty is in the application of the charge, specifically in “wiring the pages to create an electrical charge while still maintaining a paper-thin page”.6 SEE ARTICLE.

The Continuity of the Need for Design 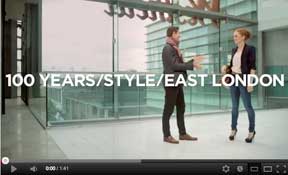 As book designers we are living in an age of incredible change. In the end, if all book content is digital, we have to ask if this is really the end of art and (gasp) of design? We don’t think so, not because of how technology is changing, but because of how people do not. In looking at the history of societies one learns to distinguish between the forms of society and its functions. The forms change drastically over the millennia, but the functions do not. As an example, watch the video below which creatively demonstrates the change in styles throughout the last century.7 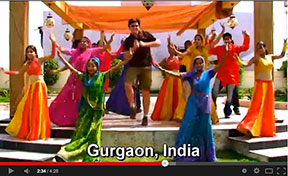 The clothes, the mannerisms, and the dancing styles all change—but the two people are still performing the same basic function—dancing together. Styles and technology (the forms) change, but the functions do not. To see this same principle not over time but across many different cultures, take a look at this.8

As in society so in design. Creativity and art will play an essential aspect in the process. Design’s vital role is to meet basic requirements, in this case for communication. In the short term the functional advantages of e-books will limit design to technological rather than creative aspects. But design is fundamentally important both for improving the legibility of information as well as for making it aesthetically attractive. Technology can store and transmit data, but it takes design to organize and convey meaning. Books are not simply about data but about meaning, and conveying meaning is a human function that will remain, no matter what form the book takes.

So what does this mean for book design? While the form of books may change drastically, humans will retain a need for all the functions books perform. This includes the transmission of content, but more importantly the organization and display of content into meaningful segmentation and intuitive presentation. And that will still require good design. After all, a book without good design is no better than a simple Word Document.